At the heart of the Fringe since 1985 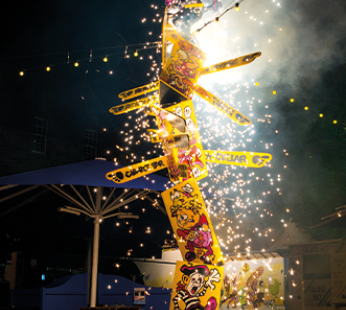 With an international profile and a network of alumni that reads like a Who’s Who of contemporary comedy, drama and entertainment, the Pleasance is a place for the experimental and the new. It is where audiences come in their tens of thousands. It is where performers, writers, directors, technicians, producers and the rest of the artistic community can develop ideas and feel fully supported. It is one of the most highly respected theatre venues at the Edinburgh Festival Fringe and in London.

The Pleasance is both a Festival Organisation of 27 temporary venues across three sites, and a London theatre and development centre, with three permanent performance spaces which operate year-round. The Pleasance in London and Edinburgh are entirely symbiotic. The Pleasance was founded in 1985 and became The Pleasance Theatre Trust, a registered charity in England, and Wales in 1995 and in Scotland in 2012.

Each year we continue to mount our most ambitious season at the Edinburgh Festival Fringe, with an unrivalled programme of theatre, comedy, dance and family shows. We present the largest programme from any venue on the Fringe and welcome thousands of audiences across our three sites at the Pleasance Courtyard, Pleasance Dome and Pleasance at the Edinburgh International Conference Centre (EICC).

For many, the festival would not be complete without a visit to the world famous Pleasance Courtyard, it is often described as the very heart of the Fringe. The Pleasance Dome was the first venue to become established in Bristo Square, now a major hub for other venues too. In 2016, the Pleasance established a partnership with the EICC, to present some of the most technically ambitious shows on the Festival Fringe in their state of the art buildings. Whether your visit is for theatre, comedy, dance, circus, children’s shows, or simply to take in the irresistible atmosphere, a day out at the Pleasance is so often unforgettable. Programming for our Edinburgh season is on a rolling basis.

The Pleasance’s year-round home in London, Islington, has provided some of the country's leading talents in the theatrical, comedy and local communities with a platform to develop work, hone their craft and grow new audiences. The artistic programme at Pleasance London runs in parallel with Pleasance Edinburgh, with curated comedy, theatre and family programmes. Pleasance London is comprised of three performance spaces - the Cabaret Main House, The Studio, and Downstairs.  With capacities ranging from 54 - 230 seats, flexible configurations and bar service to seats/tables in each venue, Pleasance London provides performing companies with excellent facilities that can be adapted for a large number of productions and events.

Pleasance Futures is the artist development strand of the Pleasance and at the very centre of everything we do, acting as an incubator for bold new artists to make their mark and take risks. Pleasance Futures is committed to discovering and supporting the most exciting new voices, nurturing the development of emerging companies, young performers, new writers and new producers.

At the Pleasance we continue to work tirelessly on behalf of artists, performers and those behind the scenes, to successfully mentor career paths that, without support, may never come to light.

We look forward to welcoming you.